If I could sum up our days of driving on the Alaska Highway I would say,

Miles and miles of beautiful mountains and more wildlife than we could imagine. The Alaska Highway, previously known as the Alcan Highway (Alaska-Canada military highway), was hastily built during WWII after Japan bombed Pearl Harbor over the course of 7.5 months. It blows my mind the hard work that went into building this ridiculously long road. One of the stretches literally disappeared when the road thawed after the winter and they had to go at it all over again. The road is in fair to good condition and we were stopped numerous times for ongoing road construction. Before driving it, I expected to road conditions to be poor but thought that was due to budgets and the small amount of travelers on the road. I realized that the road conditions are not for lack of trying. There are many experiments going on to improve highway built on permafrost but frost heaves and the harsh winters really take a toll on the conditions of the roads.

When the road first opened to the public 5 years after the war, it was extremely rugged and could go hundreds of miles between towns with services. The Milepost was originally written to mark the locations of emergency services, garages and gas and has grown to be a full on mile-by-mile guide to anything and everything you want to know about along your route to and in Alaska. If you are visiting Alaska, we highly recommend it! 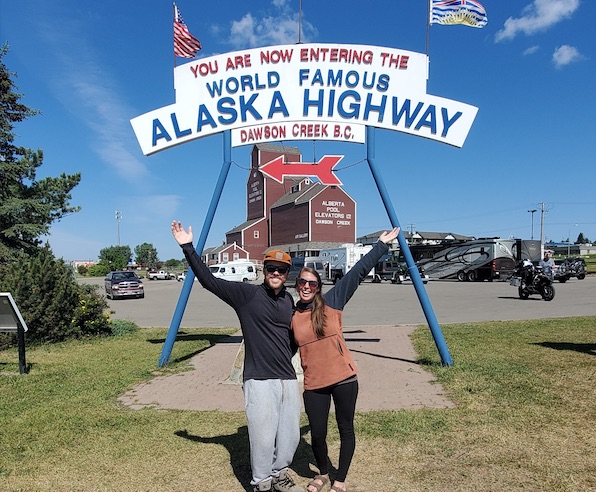 Mile 0 of the Alaskan highway begins in Dawson Creek, BC.

We spent 5 days driving the 1200+ miles through Alberta, British Columbia, Yukon, and finally the Alaskan border. 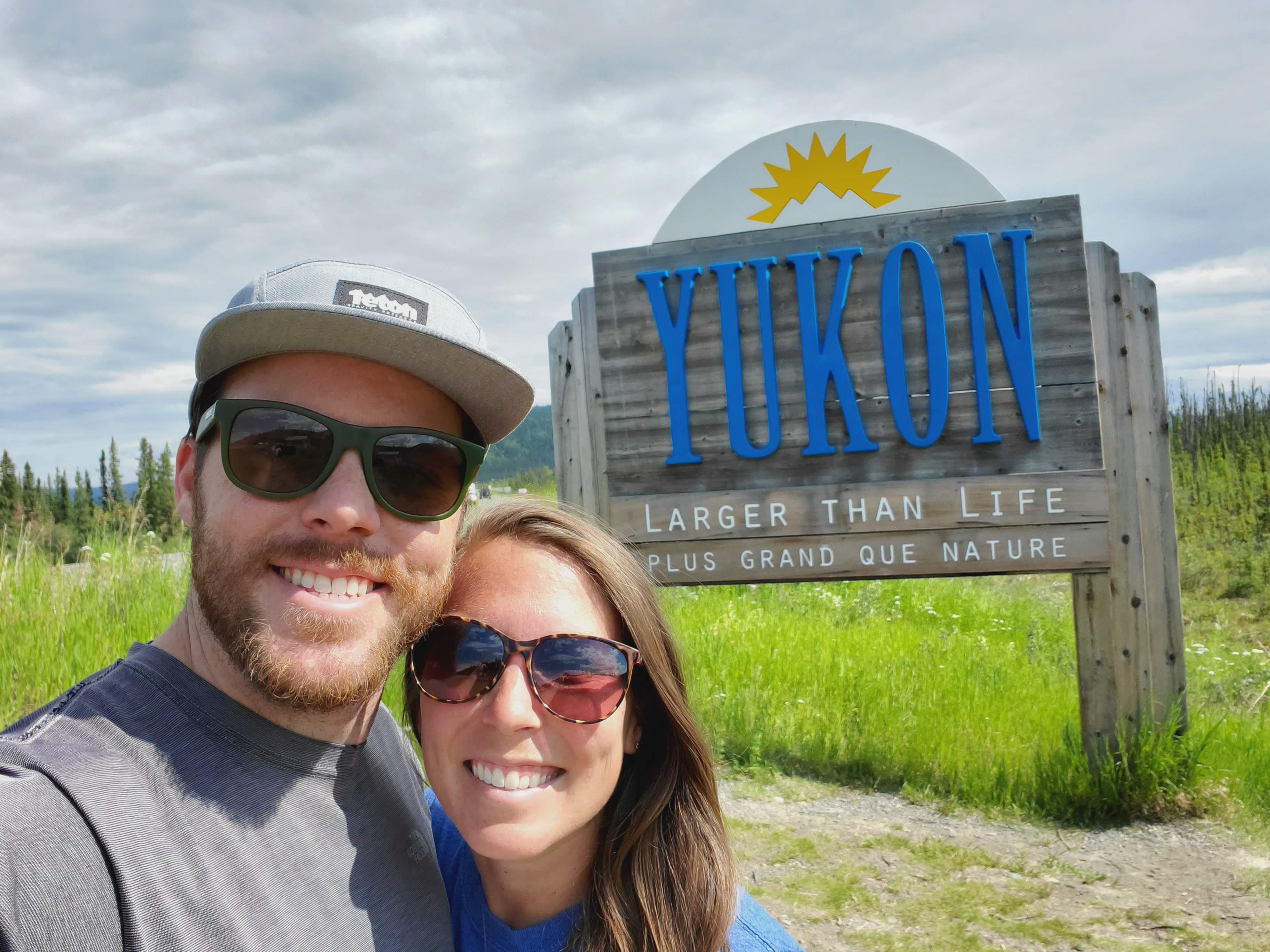 Our favorite stretch was crossing over the Northern Rockies. The views were stunning. We went through a beautiful canyon with waterfalls and stone sheep and passed by the beautiful Muncho Lake. We made a stop for a dip in the Liard Hot Springs, a natural hot springs with steamy water and a rock bottom. We accessed the hot springs via a nice half-mile boardwalk that rose above the wetland environment the hot springs created and that moose enjoy. We saw one feeding in the wetlands on our way out. We saw so much wildlife in the Northern Rockies. Our bear count doubled and we saw more moose, bison, and sheep than we could count. Whitehorse, Yukon we were surprised to find is a really awesome city that we kind of want to come back to in the winter. We biked the beautiful Miles Canyon, explored the S.S. Klondike, and checked out Yukon Brewing where the "beers are worth freezing for.” Another one of our favorite finds was Kluane National Park. It was overcast but we could see a few of the massive 16,000-19,000 ft Wrangell-St. Elias Mountains peaking through the clouds. We spent some time biking along the Kluane Lake but could have spent days here.

Our campsites were quiet and peaceful, and of course beautiful. 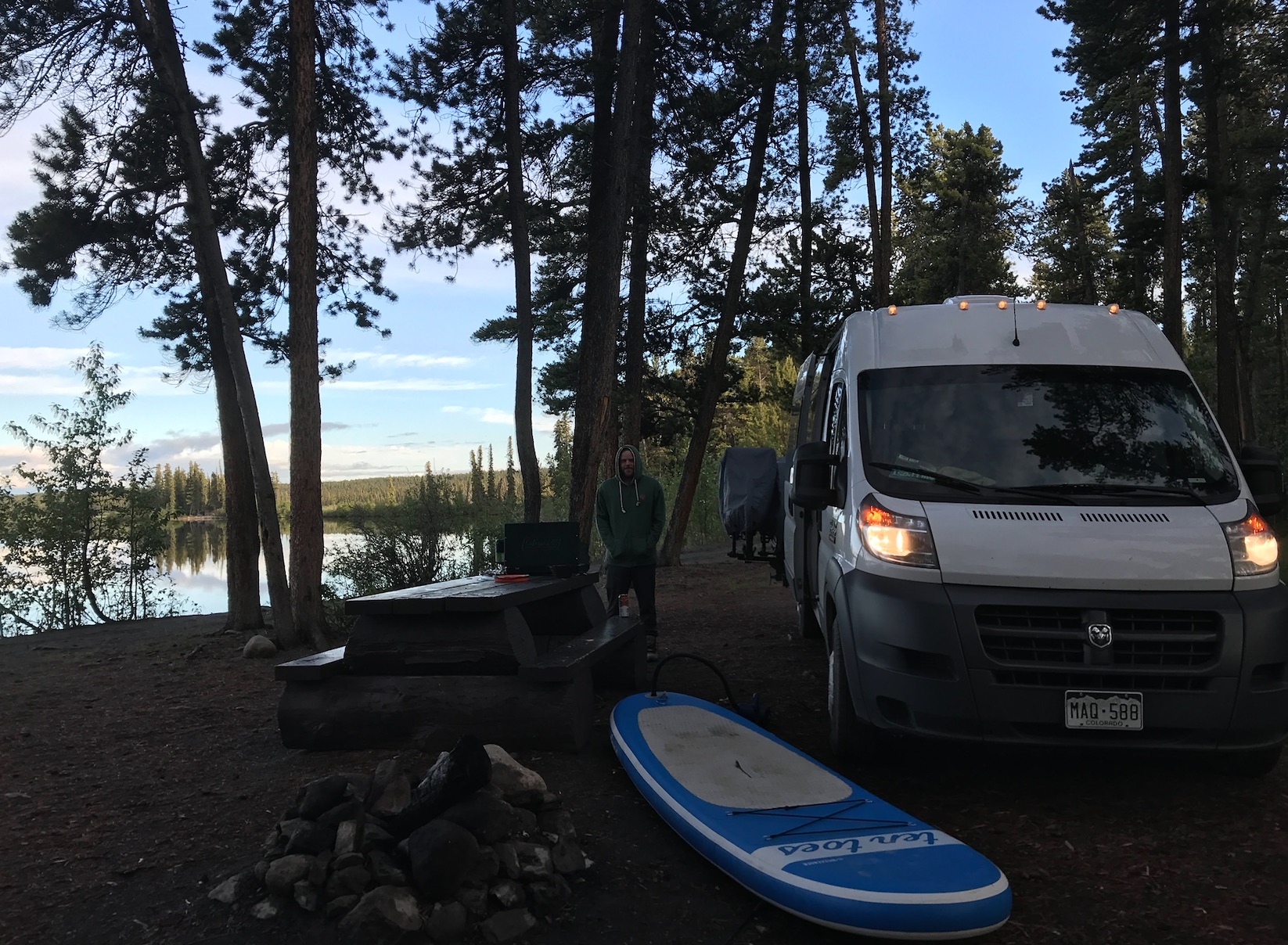 We finally crossed the border which was smooth sailing again and headed to the first Alaskan city of Tok where we gassed up, dumped our grey water and refilled our clean water, washed the van and got ourselves some expensive but necessary showers. We later read that Tok is the car washing capital of Alaska because all the RV’s do it after their long drive on the Alaska Highway which we found funny because it’s so true.

We are pumped to finally be in Alaska and can’t wait to explore the last frontier!